A Recipe for making a Developer - I

Amusing our Devs to Death

Let’s make a developer. I obviously do not have a literal kitchen recipe for you because although a sizeable portion of developers likes getting baked, putting mathematical minds in ovens had disastrous results last century. We now have less brutal ways to prepare and dispose this brave new world’s modern labor force, with or without indentured servitude. Both Huxleyan and Orwellian dystopias can create efficient developers for your latest visionary tech shop. The question is what pedigree of a developer you need, how much they should feel like they should get paid and how easily replaceable you want them to be. Hint: you need to set your story straight for the first two. As for the last, the most easily replaceable ones are either the better ones or the worst of them.

One secret sauce in all variations of this recipe is to use tech to make them feel better or even smug about themselves be it after a mere JavaScript boot camp, a CS degree or a Ph.D. in category theory. They each need to find pleasure in explaining to themselves and to you how the latest tree-shaking optimizations allow them to be free of npm bundle phobia or how they can optimally invert a binary tree in their sleep or why their fancy burrito is just a monoid in the category of endofunctors, respectively.

As important as this pungent ingredient is, an even more important restriction is that you should never - never ever - let us question the fact that we are no more than just the modern equivalents of craftsmen, smiths, and laborers who build structures like houses and churches without much say in the big picture. Instead, we must be made to feel as if we are geniuses doing our own Manhattan projects or at the very least, ‘making the world a better place’. This is unquestionably achievable for us through ‘digital transformation and automation’. It squarely fits within our little domain of expertise making us feel good as your messiah. Or one of the apostles – in cases where the team leader is the actual one true visionary, the second coming of Lord Steve Jobs himself.

With just these two things in mind, you are already half set for making a bonafide instant hire. Within a fortnight or two, you will have a fresh batch of JavaScript engineers ready to forever change the world. Add a week and they may even become scrum-certified, project-managing, medium-blogging, self-important, rockstar developers.

You will notice that those of us who actually understand our place in the corporate hierarchy are most likely humbled by imposter syndrome and office politics and, more often than not, functionally depressed or about to be. These will often become your 'problem employees' asking for more say in what they do or more pay or both or – God forbid – resignation. If you have candidates of this nature, I would suggest the Huxleyan recipe.

As a developer currently being brain-damaged by JavaScript and co., I would like to introduce this concept to you via NgRx's levels of indirections and digression. Andrew Postman, Neil Postman’s son, reiterates the core of his father’s work that dissects Huxley and Orwell in his Guardian piece as follows:

“The central argument of Amusing Ourselves [to Death] is simple: there were two landmark dystopian novels written by brilliant British cultural critics – Brave New World by Aldous Huxley and Nineteen Eighty-Four by George Orwell – and we Americans had mistakenly feared and obsessed over the vision portrayed in the latter book (an information-censoring, movement-restricting, individuality-emaciating state) rather than the former (a technology-sedating, consumption-engorging, instant-gratifying bubble).”

This is still a very American narrative regarding our sociopolitical climate. Most of our world, including highly developed nations like the US with high concentrations of developers, did enter the cliched brave new world but never really left 1984 either. The former is more about our social order and the latter is about our political order. Countries like the US, China and many of the rich cities in middle-east have managed to concurrently pull off both exceedingly well. Many other nation-states are soon to follow this trend of a liberal-but-Huxleyan social identity and a conservative-and-Orwellian political identity. Any economic entity like your new tech sweatshop or revolutionary startup or both tautologically falls under this regime too. 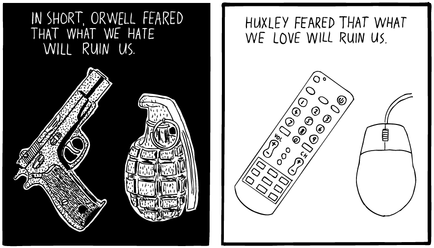 If you go by the Huxleyan recipe, for the morale and motivation problem mentioned above you would need to up your game in using seductive tech products, privileges, and gifts here and there as Pavlovian carrots and sticks. You might have noticed how pimps in movies also play the role of a drug-dealer or have one around. They have known what Huxley always suspected governments and those in power choose to do with narcotics and pleasure-seeking human nature, even before the posturing of ‘war against drugs’ and the epidemic of the ‘opioid crisis’ became a thing.

The 'soma' drug of our brave new world is not a pill. It is the dopamine hit of social media approval and digitally-crafted personalized and addictive nonsense. It is delivered through the devices many of us are going to queue up for with our credit cards and savings right after this year’s product launch.

Your developers need this instant gratification themselves too to be able to whole-heartedly participate in pushing the soma to others around them. You have to construct distorted views of reality where they think (iff they manage to think beyond technology at all) that they are doing God’s work, without which society would fall apart. At the very least, you have to keep them inside a confined garden or a well, if you will. They do not have to think much about the world beyond their code or even about the socioeconomic ramifications of the features in their next release. This could take the form of secluded housings and transportations. It could mean antipodal distances from their product assembly sweatshops. It also helps if you lead them to surmise how AI, and tech in general, will relieve us all of our mundane works and philosophize how mere pipe-dreams like Universal Basic Income will save us all from the developers’ jobs cannibalizing all human jobs.

Since the primary goal of Huxleyan citizens is to ‘find happiness’ and to be happy, the very purpose of tech entrepreneurship is to help them find it from their screens and devices. If you happen to be in an economy that is serving bigger Huxleyan economies, your political order has to be more Orwellian, the essential Huxleyan dual.

You have to have high-tech sweatshops for scaling up the aforementioned ‘consumption-engorging’ supply chain. You thus need to make and preserve developers using the Orwellian recipe in this case. You have to hide information about what your developers are building and often who they are building it for. You have to remind them often about how lucky they are to have the job coveted and desperately needed by hordes of unemployed or over-qualified junior developers in the country. You can never allow them contracts that secure their place at your organization for anything more than half a year. Actually, it helps if you further outsource and do not hire them directly at all. You cannot be responsible for individuals. You only need to talk to the company serving them on a platter or à la carte for you.

(Disclosure: This author is currently rolling out a platform primarily for these kinds of workers.)

In practice, there is no purely Orwellian or Huxleyan company. Most companies, like most societies, are a good mixture of the two these days. You will find it more likely to find secure, well-treated developers living comfortably in London, New York and most of SF Bay area and Western Europe. These are predominantly Huxleyan dev communities fueled and placated by coffee, alcohol, weed, micro-dosing or even Burning Man-like festivals. They are still mostly addicted to technology more than any drug though. Thus they are confined to a self-centered growth focus and destined to see the rest of the world as just a set of problems solvable by software and technology. I have listened and guiltily participated when they would wax poetic on topics like

[...] in Huxley's vision, no Big Brother is required to deprive people of their autonomy, maturity, and history. As he saw it, people will come to love their oppression, to adore the technologies that undo their capacities to think. [...] Huxley feared those who would give us so much that we would be reduced to passivity and egoism. Orwell feared that the truth would be concealed from us. Huxley feared the truth would be drowned in a sea of irrelevance. Orwell feared we would become a captive culture. Huxley feared we would become a trivial culture, preoccupied with some equivalent of the feelies, the orgy porgy, and the centrifugal bumblepuppy.

Having a Cake and Eating it Too

I also used to interact with Asian/Indian developers living in the US and India who were constantly looking for their next job or a better one. They would be working as temps or externs from some outsourcing firms operating in the US/EU/UK but originating in their home country.

After almost a decade in Germany, I recently started living and working from Nepal as well. I have started noticing more than before how my region of the world is producing prolific developers albeit putting them under certain different incentives and priorities. It is convenient for companies like Boeing or British Airways to be able to simply push the narrative in the news that the so-called $9-an-hour developers crashed their $100+ million Max planes or cost them £100+ million due to a flights control system changeover disaster. They still have to face the music but they can still claim to be a sound company with a good internal engineering culture. Or alternately, if questioned about bad outsourcing practices, claim that the technological problems are ‘local’ to the company exploiting the ambiguity of localness in a globalized corporate Möbius strip.

These ‘$9 developers’ are probably ethical and mindful in other areas of their lives. Since they are still making almost twice the regional average, I would guess they are probably also among the better developers from their universities and companies. I find it hard to believe that their mistakes are personal and not actually structural due to wrong contractual priorities (e.g. fast shipment and emphasis on bare minimum fulfillment of requirements) and bad supervision (e.g. doing a system changeover without coordinating well with the rest of the developers and technical personnel).

This is a problem in how developers are made and less about their proficiency.

All of these musings so far cover just the secret ingredients and the underlying kitchen chemistry for our recipe. How could we do the whole process of manufacturing, packaging, freezing, defrosting and preparing a proper developer? I would like to continue exploring this increasingly uncomfortable metaphor in the next title in this series. I have previously had complaints about my awfully long articles in the age of tweets and microblogging to cater to short attention spans and the aforementioned Huxleyan sea of irrelevance.

Also, kudos to you for making it so far.